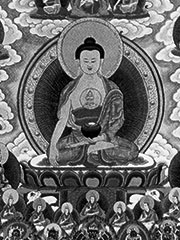 Often, one who takes refuge will make vows as well, typically vows to adhere to the Five Precepts (paĆ±ca-sila). Laypeople generally undertake at least one of the five. The Five Precepts are not given in the form of commands such as “thou shalt not ..”, but rather are promises to oneself: “I will (try) ..”

– Buddha: commit yourself to one teacher, the Buddha
– Dharma: listen, study and practice Dharma to overcome your own delusions
– Sangha: respect Sangha and train in accordance with their example

– subdue the body, speech and mind, instead of letting our senses rule us: do not speak harsh, skeptical things and avoid being judgmental.
– practice ethics and vows.
– be kind and considerate to any living being.
– make special offerings on two special days of the year: the 15th of 4th lunar month (around May), to celebrate birth, enlightenment and passing away of the Buddha, and on the 4th of 6th lunar month (around July) to celebrate the first turning of the wheel – or the first teachings of the Buddha on the Four Noble Truths in Sarnath.

– Buddha: do not follow other, lower beings as ultimate spiritual guides.
– Dharma: do not harm or upset humans or animals.
– Sangha: do not be negatively influenced by any extremists or others opposing our beliefs

– Buddha: respect all images of the Buddha, treat these as if they are Buddhas.
– Dharma: respect texts, treat them with utmost care.
– Sangha: respect even piece of robes and all who wear robes (despite behaviour)