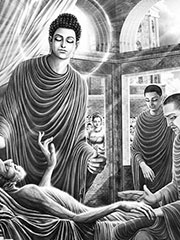 Rebirth (Sanskrit, punarāvṛtti, punarutpatti, punarjanman, or punarjīvātu), also called transmigration and reincarnation, is the belief common to all Buddhist traditions.

Rebirth in the context of other religions and other Buddhist beliefs

One of the features that distinguishes the Middle Eastern religions (Judaism, Christianity and Islam) from the Indian religions (most notably Hinduism and Buddhism) is the view of life and death. For the religions of the Middle East, life and death are linear: a being is born, lives, and then dies, at which point their soul or other death-surviving component, transmigrates to a domain that is not normally accessible to living beings and generally remains there indefinitely, or until some future at the end of the world. (There are exceptions to this rule, such as the dibbukim of Judaism, but those are in fact exceptions rather than the rule.)

For the religions of India, existence is cyclical. A being is born, lives, dies and then is re-born. For Hinduism, this process is known as reincarnation and provides a framework that is consistent with its other beliefs. There is a permanent self (atman, which would equate to the soul in western philosophy) which survives death and comes back into flesh (reincarnates) as another living being, based on its karmic inheritance.

For Buddhism, this theory is inconsistent with its primary philosophy which postulates that

Buddhism was founded in the context of Hinduism. The Buddha was born and grew up in a Hindu society, where belief in reincarnation was integral to the religious and cultural composition of that society. Yet the mechanics of reincarnation cannot be so easily explained, given the above principles of Buddhism.

The Buddha set out the law of dependent origination which seeks to explain the complex steps that lead from death to a new life, using the term rebirth rather than reincarnation. Thus it can be seen that rebirth is a derivative view of reincarnation that maintains consistency with the remainder of Buddhist belief.

At the same time (and paralleled in other terminology definitions, such as Buddha, Dhamma, Sangha) there is another, more refined view of rebirth which describes the cycle of death and rebirth in the context of consciousness rather than bodily birth and death.

Within Buddhism, the term rebirth or re-becoming (Sanskrit: punarbhava) is preferred to “reincarnation“, as the latter is taken to imply there is a fixed entity that is reborn. However, this still leaves the question as to what exactly it is that is reborn.

The lack of a fixed self does not mean lack of continuity. One of the metaphors used to illustrate this is that of fire. For example, a flame is transferred from one candle to another, or a fire spreads from one field to another. In the same way that it depends on the original fire, there is a conditioned relationship between one life and the next; they are not identical but neither are they completely distinct. The early Buddhist texts make it clear that there is no permanent consciousness that moves from life to life.

It is sometimes said that it is our saṃskāras, or volitional tendencies, that are reborn. According to this view, we have tendencies to act and think in particular ways. But again, how is it that saṃskāras can be transferred from one being to another? Perhaps still more difficult to understand is how a being in one life can reap the consequences of the conduct of another who is now dead.

These questions were problematic for the early Buddhists, and they came up with many theories to respond to them. The Puggalavāda school believed in a personal entity (puggala) that transmigrates from life to life to provide the link of personal continuity that allows for karma to act on an individual over time. The medieval Pali scholar Buddhaghosa posited a `rebirth-linking consciousness’ (patisaṅdhi), which connected the arising of a new life with the moment of death, but how one life came to be associated with another was still not made clear. Some schools were led to the conclusion that karma continued to exist in some sense and adhere to a particular person until it had worked out its consequences. Another school, the Sautrantika, made use of a more poetic model to account for the process of karmic continuity. For them, each act `perfumed’ the individual and led to the planting of a `seed’ that would later germinate as a good or bad karmic result.

While all Buddhist traditions seem to accept some notion of rebirth, there is no unified view about precisely how events unfold after the moment of death. Theravada Buddhism generally asserts that rebirth is immediate. The Tibetan schools, on the other hand, hold to the notion of a bardo (intermediate state) which can last up to forty-nine days, and this has led to the development of a unique `science’ of death and rebirth, a good deal of which is set down in what is popularly known as The Tibetan Book of the Dead.

While Theravada Buddhism generally denies there is an intermediate state, some early Buddhist texts seem to support it. One school that adopted this view was the Sarvāstivāda, who believed that between death and rebirth there is a sort of limbo in which beings do not yet reap the consequences of their previous actions but in which they may still influence their rebirth. The death process and this intermediate state were believed to offer a uniquely favourable opportunity for spiritual awakening.

The being in this intermediate state was known as a gandhabba (Sanskrit gandharva), and for pregnancy to occur a gandhabba is propelled towards rebirth through its desire for sex. The gandhabba witnesses its potential father and mother in sexual union and (if it is male) experiences lust for his mother and hatred towards the father, whom he sees as a rival (and vice versa). (Modern technologies, such as in vitro fertilization and cloning, would seem difficult to accommodate into this account.) Through its desire for sex, the gandhabba interposes itself between the parents. It then installs itself in the womb until birth takes place. Not all gandhabbas are conscious of their actions, for example, it might enter the womb to shelter from a chaotic storm.

Rebirth as Cycle of Consciousness

Buddhist meditation teachers suggest that through careful observation of the mind, it is possible to see consciousness as being a sequence of conscious moments rather a continuum of awareness. Each moment is an experience of an individual mind-state: a thought, a memory, a feeling, a perception. A mind-state arises, exists and, being impermanent, ceases following which the next mind-state arises. Thus the consciousness of a sentient being can be seen as a continuous series of birth and death of these mind-states. In this context rebirth is simply the persistence of this process. Clearly this explanation of rebirth is wholly divorced from rebirth which may follow bodily death and it is possible for a Buddhist to believe in either, both or neither definition.

The explanation of rebirth as a cycle of consciousness is much more consistent with other core Buddhist beliefs, such as anicca (impermanence), dukkha (unsatisfactoriness) and anatta (non-self). Furthermore it is possible to observe a karmic link between these mind-states.

In the practice of Vipassana meditation, the meditator uses “bare attention” to observe the endless round of mind-states. This observation derives insight and understanding from seeing this cycle of birth, death and rebirth without interfering, owning or judging the individual states of mind that arise and pass away. This understanding enables them to limit the power of desire, which according to the second noble truth of Buddhism is the cause of Dukkha (suffering, unsatisfactoriness) thus making possible the realisation of Nibbana. So it can be concluded that the understanding of rebirth in the context of the cycle of consciousness is an invaluable and practical component of the fundamental aim of Buddhism.

Sources that identify rebirth with reincarnation