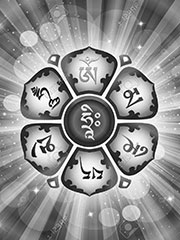 “Om mani padme hum” (Tibetan: there is no translation directly, the pali or sanskrit is always used. Pronunciation varies, see the transliterations).

This is probably the most famous mantra in Buddhism, the six syllabled mantra of the bodhisattva of compassion, Avalokiteshvara (Sanskrit. Chenrezig in Tibetan). The mantra is particularly associated with the four-armed Shadakshari form of Avalokiteshvara. The Dalai Lama is said to be an incarnation of Avalokiteshvara, so the mantra is especially revered by his devotees.

Here is the sound of the mantra as chanted by a Tibetan refugee: and .

In English the mantra is variously transliterated, depending on the schools of Buddhism as well as individual teachers.

This mantra possesses many meanings, a popular translation is “Hail the jewel in the lotus”. Om = Hail, Mani = Jewel, Padme = Lotus and Hum sums it all up.

Another meaning is purification of the six realms of existence in suffering.

The first known description of the mantra appears in the Karandavyuha Sutra, which is part of certain Mahayana canons such as the Tibetan. In this sutra, Shakyamuni Buddha states, “This is the most beneficial mantra. Even I made this aspiration to all the million Buddhas and subsequently received this teaching from Buddha Amitabha.”

“The path is indicated by the next four syllables. Mani, meaning jewel, symbolizes the factors of method-the altruistic intention to become enlightened, compassion, and love.”

“Purity must be achieved by an indivisible unity of method and wisdom, symbolized by the final syllable hum, which indicates indivisibility”

So in this way recitation of the mantra helps achieve perfection in the six practices from generosity to wisdom. The path of these six perfections is the path walked by all the Buddhas of the three times. What could then be more meaningful than to say the mantra and accomplish the six perfections?

Donald Lopez provides a thorough discussion of the mantra and its various interpretations in his book Prisoners of Shangri-La: Tibetan Buddhism and the West (ISBN 0226493113). Lopez is an authoritative writer and challenges the conventional analysis of the mantra as “The Jewel in the Lotus”, an interpretation supported by neither linguistic analysis nor Tibetan tradition. He suggests that Manipadme is actually the name of a bodhisattva, a form of Avalokiteshvara who in any case has many other names, including Padmapani or lotus flower in hand. The Brahminical insistence on absolutely correct pronunciation of Sanskrit broke down as Buddhism was exported to other countries where the inhabitants found it impossible to reproduce the sounds. So in Tibet, for instance, where this mantra is on the lips of many Tibetans all their waking hours, the mantra is pronounced Om mani peme hum.