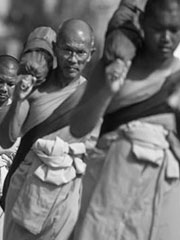 “Northern Buddhism” refers to Buddhism as practiced in East Asia and the Tibetan region- particularly China, Tibet, Korea, Mongolia, and Japan. It is often held to by synonymous with Mahayana.

“Southern Buddhism” represents Buddhism as practiced in Sri Lanka and most of Southeast Asia. It is usually considered to be synonymous with the Theravada.

The use and meaning of these terms reflects only the contemporary situation of the various schools of Buddhism in Asia, and even that only imperfectly. While the Theravada presently dominates in Southeast Asia, prior to the 13th Century the Mahayana was also well-established in that region. The survival of certain Mahayana notions in popular Southeast Asian Buddhism (such as the worship of Lokesvara- a form of Avalokitesvara- in Thailand) reflect the early presence of Mahayana ideology in the “Southern Buddhist” world. Ongoing contact between Southeast Asia and India brought a variety of doctrines, relics, and texts into Southeast Asia from both the Mahayana and Vajrayana traditions, as well as the Theravada and the other early Buddhist schools. Only after the decline of Buddhism in India did Theravada Buddhism begin to dominate in Southeast Asia, with Theravada-dominated Sri Lanka replacing India as the source of new texts and teachers.

In East Asia and Tibet, the lands traditionally described as “Northern Buddhist”, non-Mahayana traditions have also exerted influence. Notably, the monastic codes (vinaya) followed by Mahayana monks from every tradition have their origin in the monastic codes followed by monks of the various Nikaya traditions. The historical evidence for the cohabitation of Mahayana and non-Mahayana monks in South Asian monasteries during the spread of Buddhism from India to East Asia provides additional evidence that the form of Buddhism practiced in the “Northern” territories likely retains many non-Mahayana influences. Furthermore, in certain regions of China and East Asia (notably in Southern China), non-Mahayana forms were sometimes dominant.