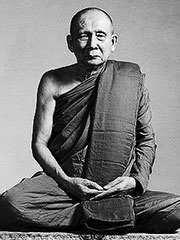 In 1972, he was given the title Somdet Phra Nyanasamvara, the same basic title that he bears today. This was a special monastic title that had not been granted to a Thai bhikkhu in over 150 years. The granting of this title placed Somdet Phra Nyanasamvara in the top tier of the Thai monastic establishment, and set the stage for his being named Supreme Buddhist Patriarch of Thailand (Sangharaja, or “Lord of the Sangha”) in 1989 by the king and queen of Thailand.

Somdet is a title given to the highest officials in the Thai Sangha. Phra is a Thai term for monk that is used similarly to the way ‘Rev.’ is used in the West. Nyanasamvara is also an honorary title, similar to Somdet, but not held by all Thai Patriarchs; it was specially bestowed on the patriarch in 1972. Mahathera (“great elder”) is an honorific indicating his seniority. His name at birth was Charern Gajavatra, and he is sometimes credited (particularly in his writings) as Suvaddhano Bhikkhu.