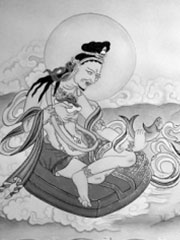 Mahamudra (Sanskrit: great seal’ or ‘great symbol) or Chagchen (Tibetan) is a method of direct introduction to the nature of Mind (or Buddha-nature) and the practice of stabilizing the accompanying transcendental realization.

It is practiced by the Kagyu, Gelug and Sakya schools of Tibetan Buddhism and possibly also by derivative Vajrayana orders in China, Russia and Japan. The Nyingma and Bön traditions and their derivatives practise a cognate but distinct method of direct introduction called dzogchen.

The term mahamudra is often explained as referring to the uncontestable validity of the experience. For example, if a document bears the Great Seal of the Emperor, then there is no question as to the authenticity of that document. Similarly, it is said that during the genuine experience of mahamudra, one has no question that one is directly glimpsing the nature of Mind (which is Tathagatagarbha, realization that it is possible to achieve Buddhahood) and that recalling and stabilizing this experience leads to profound certainty and eventual enlightenment.

The meditative practice of mahamudra is divided into two distinct stages: śamatha (“tranquility”) and vipaśyanā (often rendered “insight”). The first can be described as concentration whereby one learns, patiently, to “tame” or focus one’s mind or mental awareness. After the power of effortless concentrated consciousness had been achieved, the second stage of vipashyana can begin. During this part of the exercise, the practitioner’s mind is trained to witness sensory, emotional and mental processes without attachment, i.e. while observing images, sounds and sensations, a meditator’s consciousness disidentifies from any particular object, having as the result bodhi or enlightenment.

Essentially, when the awareness (subjective perceiver) meets the conscious process (the object of perception) which is the mind, the mahamudra is the recognition that the division of this subject-object dichotomy/duality is nonexistent. Active awareness resting in the recognition of the conscious processes while the ‘movement’ of thoughts and emotions is going on, is the attainment of self-sustaining samadhi or enlightment. Each thought and conscious impulse liberates on its own, as they emerge, feeding again the state of present mahamudra in return.

Mahamudra, belonging to a class of non-energetic yogas (contrast the six yogas of Naropa), is the most widespread meditative practice in Tibetan Buddhism. For some, it is equal to the Soto Zen practice of meditation, with śamatha and vipaśyanā named in Chinese chih and kuan (in Chinese character 止觀) One should note, however, that the elaborate teachings on both calming, and insight meditations within the Mahamudra traditions, is filled more greater subtleties and nuances than the Soto schools teach.