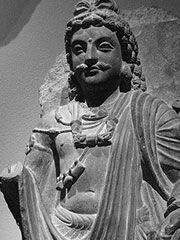 Mahadhammarakkhita (Sanskrit: Mahadharmaraksita) was a Greek (in Pali:”Yona”, lit. “Ionian”) Buddhist master, who lived during the 2nd century BCE during the reign of the Indo-Greek king Menander.

In the Mahavamsa, a key Pali historical text, he is recorded as having travelled from “Alasandra” (thought to be Alexandria-of-the-Caucasus, around 150 kilometers north of today’s Kabul), with 30,000 monks for the dedication ceremony of the Maha Thupa (“Great stupa“) at Anuradhapura in Sri Lanka, when it was completed shortly after the death of the Sri Lankan king Dutthagamani Abhaya (r. 161- 137 BCE).

The Mahamvasa lists the congregations that visited Sri Lanka for the dedication of the Maha Thupa, explaining that:

“From Alasanda the city of the Yonas came the thera (elder) Yona Mahadhammarakkhita with thirty thousand bhikkhus.” (Mahavamsa, XXIX)

This reference is seen as having several implications regarding the role of the Greeks in the Buddhist community at that time:

It is also separately established through another text, the Milinda Panha, and archeological evidence that Menander himself ruled a vast empire in northern India, and that he became a Buddhist arhat. According to Buddhist tradition he was a great benefactor of the Buddhist faith, on a par with Ashoka or the Kushan Kanishka.

These elements tend to indicate the importance of Buddhism within Greek communities in northwestern India, and the prominent role Greeks probably played in developpig the Buddhist faith during its first few formative centuries.