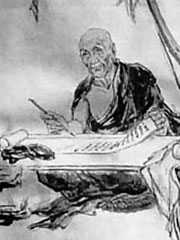 Fǎxiǎn (pinyin, Chinese characters: 法顯, also romanized as Fa-Hien or Fa-hsien) (ca. 337 – ca. 422) was a Chinese Buddhist monk, who, between 399 and 412 travelled to India to bring Buddhist scriptures. His journey is described in his work A Record of Buddhistic Kingdoms, Being an Account by the Chinese Monk Fa-Hien of his Travels in India and Ceylon in Search of the Buddhist Books of Discipline. On Faxian’s return to China he landed at Laoshan in modern Shandong province, 30km east of the city of Qingdao. After landing, he proceeded to Shandong’s then-capital, Qingzhou, where he remained for a year translating and editing the scriptures he had collected.