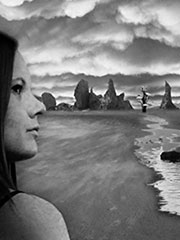 Faith (saddha/ sraddha) is an important constituent element of the teachings of the Buddha – both in the Theravada tradition as in the Mahayana. In the Kalama Sutra the Buddha explicitly argues against “blind faith” based simply on authority, tradition or similarly questionable grounds. Nevertheless, there remains a requirement for a degree of trusting confidence and belief in Buddhism, primarily in the spiritual attainment and salvational knowledge of the Buddha. Faith in Buddhism centres on belief in the Buddha as a supremely Awakened being, on his unexcelled role as teacher of both humans and gods, in the truth of his Dharma (spiritual Doctrine), and in his Sangha (community of spiritually developed followers). Faith in Buddhism functions as a form of motor, which propels the Buddhist practitioner towards the goal of Awakening (bodhi) and Nirvana.

When a person decides to give up domestic life and live as a monk or nun, it is said to be out of faith (“through faith in the Lord”) that he/she does so (Majjhima-Nikaya 107 and 140): first comes the hearing of Dhamma (verbalised spiritual Truth) from the Buddha or one of his disciples, and then follows faith in the Buddha’s teaching and reflection upon the value of its application (Majjhima-Nikaya 112).

Faith is primarily faith in the Buddha himself as the Teacher of supreme spiritual realisation and accomplishment. The Buddha extols such faith as befitting a “noble” Buddhist disciple:

“The ariyan disciple is of faith; he has faith in the Awakening of the Tathagata , and thinks: He is indeed Lord, perfected one, fully Self-Awakened One, endowed with right knowledge and conduct, well-farer, knower of the world(s), matchless charioteer of men to be tamed, teacher of devas and men, the Awakened One, the Lord.” (Majjhima-Nikaya 53).

Such faith, it is said, can lead towards Liberation. Indeed, a person who is “released by faith” can well, in consequence, be “on the path to arahantship” (spiritual adeptship) (according to the Buddha of the Anguttara-Nikaya, Book of Threes, 21). It is for such reasons that faith is stated by the Buddha to be appropriate as “a person’s partner” (Samyutta-Nikaya, Sagathavagga, 200) and to be “a man’s best treasure” (ibid, 228). The Buddha even quotes with evident approval the god Sakka’s Dharma-charged words:

“… faith in the Tathagataunshakable and well established …… the person of intelligence,remembering the Buddha’s Teaching,should be devoted to faith and virtue,to confidence and vision of the Dhamma .” (ibid, 912).

The role of faith in Mahayana Buddhism is, if anything, even stronger. Its depth and range become intensified, particularly in the tathagatagarbha sutras and the “Pure Land” literature.

In the Mahaparinirvana Sutra, the Buddha accords a foundational position to faith. He states: “we say that unsurpassed Awakening has faith as its cause. The causes of Awakening are innumerable, but if stated as faith, this covers everything.”

Faith as understood in this, the Buddha’s final Mahayana sutra, is belief in the teachings of the Buddha and in the Buddha’s own eternality. More specifically, it is belief in such doctrines as the law of karma, in the reality and eternity of the Three Jewels (i.e. the Buddha, the Dharma, and the Sangha), as well as in the efficacy of the Buddhist Path. The Buddha comments: “All that is said in these Mahayana sutras is the truths of the Way .. As I have already stated, if one believes in the Way, such a Way of faith is the root of faith. This assists the Way of Awakening .. The Way begins with the root of faith … (Yamamoto/Page, Chapter 20, “On Holy Actions”).

The Buddha further notes that a person possessed of faith is superior to one lacking in it:

Faith in the Buddha is seen as a positive virtue as it leads to more attentive absorption in Dharma, which in turn strengthens faith still further. The Buddha remarks: “Faith arises out of listening to Dharma, and this listening is grounded in faith.” (Yamamoto/Page, Vol. 8, Ch. 34 “On Bodhisattva Lion’s Roar” (b), p. 44).

Through such faith, along with other spiritual practices, the Buddhist aspirant is enabled to attain Nirvana, so the Buddha of the Mahaparinirvana Sutra teaches. Faith is the first step for the Bodhisattva to tread along that path to Nirvana. It is viewed as a basic requirement, and crucially entails the understanding that the “real” Buddha is not a being of flesh and blood who can bleed and who dies, or whose Truth (Dharma) perishes with his physical body. The true Buddha and his Dharma are utterly deathless and eternal, so the Mahaparinirvana Sutra insists. This the Bodhisattva is urged to believe:

“First, he is perfect in faith. How is faith perfect? This is believing deeply that the Buddha, Dharma and Sangha are Eternal, that all Buddhas of the ten directions make use of expedients , and that beings and icchantikas all possess the Buddha-dhatu . It is not believing that the Tathagata is subject to birth, old age, illness, and death, that he has undergone austerities, and that Devadatta really caused blood to flow from the Buddha’s body, that the Tathagata ultimately enters Nirvana , and that authentic Dharma dies out. This is where we speak of the Bodhisattva’s being perfect in faith.” (Yamamoto/Page, Vol. 9, Chapter 38, “On Bodhisattva Lion’s Roar” (f), p. 33).

Yet faith in the Buddha should not be blind. The Mahayana not infrequently links faith with discernment and spiritual insight (prajna) – spiritual penetration. The following words of the Buddha’s indicate the need for a balance:

“If a person does not possess faith and insight , such a person increases his ignorance. If a person possesses insight, but not faith, such a person will increase distorted views. .. A person who has no faith will say, out of an angry mind: ‘There cannot be any Buddha, Dharma, and Sangha!” (Yamamoto/Page, Vol. 10, Chapter 42, “On Bodhisattva Kasyapa” (c), p. 65).

“No sravakas or pratyekabuddhas are able to know, see or investigate this matter with their insight. How much less able to do so are foolish ordinary people, except when they directly realise it by faith!”

Faith is thus presented as a powerful means for the Buddhist practitioner to penetrate through to, and realise for him/herself, deep spiritual truths.

It is not only in the tathagatagarbha literature that faith is lauded. In the prajnaparamita scriptures, too, faith is extolled. Here it is usually in connection with trust and belief in the sutra which is at that moment being expounded. Thus in the Prajnaparamita Sutra on How Benevolent Kings May Protect Their Countries, the Buddha declares that even if living beings were to give away the most precious substances known to humanity in a huge act of generosity, still “their merit would not be such as that of the production of one single thought of serene faith in this Sutra” (Conze II, p. 203). This and other prajnaparamita sutras explain that such persons who naturally engender faith in these texts are those who have worshipped and revered countless Buddhas in past incarnations. Faith comes naturally to them. Moreover, faith in, and reverence towards, such sutras is tantamount to faith and reverence directed towards all Buddhas. The Buddha asserts in the 18,000-Line Prajnaparamita Sutra:

It is perhaps in the “Pure Land” sutras that faith and devotion reach a pinnacle of soteriological importance. Here it is one’s faith in the salvific compassion of the Buddha Amitabha, coupled with one’s development of “roots of goodness” and the earnest wish to enter the Buddha’s happy land, that is said to bring deliverance into Buddha Amitabha’s Western Paradise, the “land of bliss”, preparatory to entry into Awakening and Nirvana. In the Contemplation of Amitayus Sutra, the Buddha tells of the types of being who gain birth in this happy realm – and they are all characterised by faith:

“Those born in the Western Land are of nine grades. Those who attain birth on the highest level of the highest grade are sentient beings who resolve to be born in that land, awaken the three kinds of faith and so are born there. What are the three? They are, first, the sincere faith, second, the deep faith; and third, the faith that seeks birth there by transferring one’s merit. Those who have these three kinds of faith will certainly be born there.”

However, even in these faith-oriented sutras of “Pure Land” Dharma, faith is often linked with understanding (it is not totally “blind faith”). The Buddha of the Smaller Pure Land Sutra speaks of faith allied with understanding as a prerequisite for the attainment of supreme Awakening (bodhi), when hearing this text. Thus:

“Furthermore … if there is a good son or good daughter, whether having already heard this, or shall hear it, or who is now hearing it – once hearing this Sutra, profoundly is there born an understanding faith. Once there is born an understanding faith, a certainty about the accumulations of merit residing in the ten directions with the Buddha World-Honoured Ones, whose number is like the sands of ten River Ganges, and they practice as instructed, all will be firmly in the supremely unexcelled Bodhi.”

This teaching of faith, originally advocated in conjunction with discernment and Dharmic practice, received a new interpretation in the teachings of the Japanese Buddhist saint, Shinran Shonin (1173-1262 CE), who taught that just one recitation of the mantra, “Homage to Amida Buddha”, with deep faith, would be enough to secure the faithful person entrance into the Western Paradise. Subsequent utterances of that formula would be expressions of gratitude to Buddha Amida (Amitabha). Deep understanding of the Buddha’s teachings and Buddhic practice were not necessary, Shinran claimed. This interpretation of the “Pure Land” sutras represents perhaps the zenith of faith-oriented Buddhism and remains controversial, although Shinran’s school of “Jodo Shinshu” is today perhaps the largest Buddhist sect in Japan.

One of the most famous of Mahayana sutras, the Lotus Sutra, also embraces the ideal of faith, but links it to discernment (which would appear to be more in harmony with the Buddha’s general doctrines). The Buddha tells his audience in the Lotus Sutra:

“If any living beings who seek after the Buddha-way either see or hear this Law-Flower Sutra , and after hearing it believe and discern, receive and keep it, you may know that they are near Perfect Enlightenment.”

The same sutra asserts that the Dharma as a whole is difficult to grasp with mere words, and that ultimately only those Bodhisattvas who believe with firm faith can penetrate its nature. The Buddha says:

Thus faith is a major element within Buddhism. While it is rarely (if ever) taught by the Buddha in any “blind” form and is often linked to discernment and understanding, it is nevertheless viewed as a powerful force which can start the Buddhist practitioner on his or her spiritual journey and convey him or her towards Awakening itself. Perhaps the most enthusiastic paean to faith can be found in the massive Avatamsaka Sutra, where, to the delight of all the Buddhas, the Bodhisattva Chief-in-Goodness proclaims the following verses in a great eulogy of bodhisattvas’ Faith: