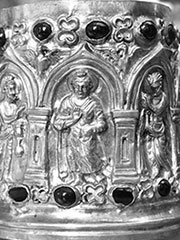 “In the art of Gandhara, the first known image of the standing Buddha and approximatively dated, is that of
the Bimaran reliquary, which specialists attribute to the Indo-Scythian period, more particularly to the rule of Azes II” (Christine Sachs, “De l’Indus à l’Oxus”).

“The well-known gold and ruby reliquary found at Bimaran in Afghanistan is generally assigned a date of about the second century AD in spite of the virtually incontrovertible scientific evidence surrounding it that suggests that it was made about the first century BC. The resistance to the early dating of the reliquary is based solely on the assumption that Buddha images were not introduced into the Buddhist artistic repertoire until the early centuries of the Christian era, and therefore that any work that bears an image of the Buddha must be of a comparably late date.” (S. L. Huntington, Art Journal, Vol. 49 No. 4 Winter.1990, Pp.401-408)