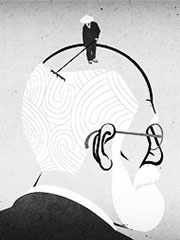 The metaphor is considerably extended in the Consciousness-only teachings of the Yogacara school of Buddhism. According to this theory, all experiences and actions produce bija as impressions, stored in the alaya (storehouse) consciousness. The external world is produced when the seeds “perfume” this consciousness. This view of bija has been equated to memes, with the theory itself positing an extreme form of memetics (ie. reality and existence consist purely of memes).

In Esoteric Buddhism and Hinduism, the term bija is used for mystical “seed syllables” contained with mantras. These seeds do not have precise meanings, but are thought to carry connections to spiritual principles. The best-known bija syllable is Om, which first is seen in the Hindu scriptures known as the Upanishads.