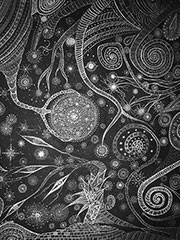 In Buddhism, the arūpajhānas are four successive levels of meditation on non-material objects.

These levels are higher than the rūpajhānas, and harder to attain.

This has to be understood. In the fourth rupajhana, there is already Upekkha, equanimity and Ekkagata, concentration, but the mind is still focused on a “material” object, as any color.

These “explanations” obviously do not refer to any intellectual, philosophical comprehension, which disappear since the second jhana. They attempt to figure mental process. The arūpajhānas are part of the kammatthanas, and are referred to as the four “formless states”.

The two elements of arūpajhāna

Some Tipitaka texts identify arupajhanas as a part of the fourth rupajhana, as they include two elements: upekkha and ekagatta.

Upekkha is a Sanskrit and Pali word meaning equanimity. The opposition between comfortable sensations and uncomfortable ones disappears. More importantly, it is one of the fourth Jhana’s factors, present only in this Jhana.

Ekkagata, a Jhana’s factor, simply means a very deep concentration, which includes the ceasing of stimuli from the exterior world. It is the only jhanic factor present in each Jhana. ArĊĞpajhana.