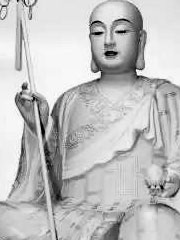 Zhi Yao (Ch:支曜) was a Kushan Buddhist monk of Yuezhi ethnicity who was involved with the translation of Buddhist texts into Chinese around 185 CE.

His origin is described in his adopted Chinese name by the prefix Zhi (Ch:支), abbreviation of Yuezhi (Ch:月支).

Zhi Yao was a student of Lokaksema. He translated in particular a Mahayana text:

— The Sutra on the Completion of Brightness (Ch:成具光明经, Chengiu guangming jing).