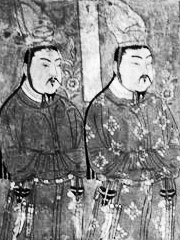 The first contacts between China and Central Asia occurred with the opening of the Silk Road in the 2nd century BCE. The 1st century BCE «Records of the Great Historian» (Ch:史記, Shiji) describes the travels of the Chinese explorer Zhang Qian to Central Asia around 130 BCE, who reports about a country named Shendu (India), whose peaceful Buddhist ways are mentionned in writing in the 1st century CE Han history, the Hanshu.

After 130 BCE, numerous embassies to the West followed Zhang Qian’s travels, and there may have been some contacts with Buddhism around that time. Chinese murals in the Tarim Basin city of Dunhuang describe the Emperor Han Wudi (156-87 BCE) worshipping Buddhist statues, «golden men brought in 120 BCE by a great Han general in his campaigns against the nomads». However, there is no such mention of Han Wudi worshipping the Buddha in Chinese historical litterature.

«There is a current tradition that Emperor Ming dreamed that he saw a tall golden man the top of whose head was glowing. He questioned his group of advisors and one of them said: “In the West there is a god called Buddha. His body is sixteen chi high (3.7 metres or 12 feet), and is the colour of true gold.” The Emperor, to discover the true doctrine, sent an envoy to Tianzhu (Northwestern India) to inquire about the Buddha’s doctrine, after which paintings and statues appeared in the Middle Kingdom.» (Hou Hanshu, trans. John Hill)

«The establishment of the Baima Temple (Temple of the White Horse) by Emperor Ming (58-75 CE) of the Han marked the introduction of Buddhism into China. The temple was located on the south side of the Imperial Drive, three leagues (li) outside the Xiyang Gate. The Emperor dreamt of the golden man sixteen Chinese feet tall, with the aureole of sun and moon radiating from his head and his neck. A «golden god», he was known as Buddha. The emperor dispatched envoys to the Western Regions («遣使向西域求之») in search of the god, and, as a result, acquired Buddhist scriptures and images. At the time, because the scriptures were carried into China on the backs of white horses, White Horse was adopted as the name of the temple.» (Translation: Ulrich Theobald).

«In former times, the people of Fusang knew nothing of the Buddhist religion, but in the second year of Da Ming of the Song dynasty (485 CE), five monks from Kipin (Kabul region of Gandhara) travelled by ship to that country. They propagated Buddhist doctrine, circulated scriptures and drawings, and advised the people to relinquish worldly attachments. As a results the customs of Fusang changed» (Ch:»其俗舊無佛法,宋大明二年,罽賓國嘗有比丘五人游行至其國,流通佛法,經像,教令出家,風 俗遂改.», Liang Shu «History of the Liang Dynasty, 7th century CE).