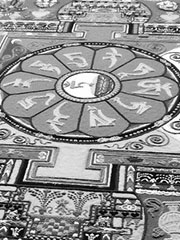 The Sand Mandala (tib: kilkhor) is a Tibetan Buddhist tradition which symbolises the transitory nature of things. As part of Buddhist canon, all things material are seen as transitory. A sand mandala is an example of this, being that once it has been built and its accompanying ceremonies and viewing are finished, it is systematically destroyed.

Historically, the mandala was not created with natural, dyed sand, but granules of crushed coloured stone. In modern times, plain white stones are ground down and dyed with opaque inks to achieve the same effect. Before laying down the sand, the monks assigned to the project will draw the geometric measurements associated with the mandala. The sand granules are then applied using small tubes, funnels, and scrapers, until the desired pattern over-top is achieved. Sand mandalas traditionally take several weeks to build, due to the large amount of work involved in laying down the sand in such intricate detail. It is common that a team of monks will work together on the project, creating one section of the diagram at a time, usually working from the center outwards.

The Kalachakra Mandala for instance, contains 722 deities portrayed within the complex structure and geometry of the mandala itself. Other smaller mandalas, like the one attributed to Vajrabhairava contain sufficiently fewer deities and require less geometry, but still take several days to complete. Like all mandalas, these are meant as two-dimensional representations of what is supposed to be a three-dimensional environment. There is one particular case where a three-dimensional mandala can be experienced: Borobodur in Java, Indonesia.

The destruction of a sand mandala is also highly ceremonial. Even the deity syllables are removed in a specific order, along with the rest of the geometry until at last the mandala has been dismantled. The sand is collected in a jar which is then wrapped in silk and transported to a river (or any place with moving water), where it is released back into nature. For this reason, the materials in a sand mandala are always biodegradable and in keeping with the symbolism, are never used twice.