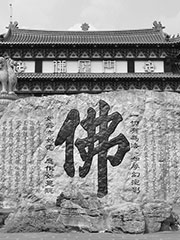 Pao Fa Temple (寶法寺, pinyin: bǒa fǎ sì) is one of the large Buddhist monasteries and Buddhist temples in the United States. It is located in the upscale suburb of Irvine, California. It mainly attracts Chinese American and Vietnamese American Buddhists, including many who are students at the University of California, Irvine.

The Taiwan-born Venerable Jen-Yi is the founder and abbot of Pao Fa Temple. In 1990 he accepted the advice from the Venerable Master Hsuan Hua of the City of Ten Thousand Buddhas to build the temple in Irvine. At a cost of $5 million, the temple was built on a former site of a Pacific Bell building and it was opened in late 2002.