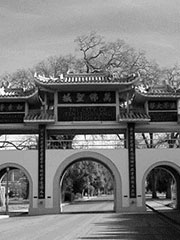 The City Of Ten Thousand Buddhas (萬佛聖城, Wàn Fó Sheng Cheng) is an international Buddhist community and monastery founded by the Venerable Master Hsuan Hua, an important figure in Western Buddhism. It is the first Chinese Zen Buddhist temple in the United States.

The city is situated in Talmage, California, Mendocino County, about 4 miles east of Ukiah, and 110 miles (180 km) north of San Francisco. It was one of the first Buddhist monasteries built in the United States. The temple follows the Wei-Yang Ch’an (Chinese Zen) school of Buddhism. The city is noted for their close adherence to the vinaya, the austere traditional Buddhist monastic code.

The Dharma Realm Buddhist Association purchased the City of Ten Thousand Buddhas site, originally the site of Mendocino State Hospital founded in 1889, in 1974, and had established an international center there by 1976. The city comprises 488 acres (2 km²) of land.

About 80 acres (0.3 km²) of land is presently been used and has buildings. The rest of the land includes meadows, orchards, and forests. Large institutional buildings and smaller residential houses are scattered over the west side of the property. The main Buddha hall and monastic facilities, the educational institutes, the administrative offices, the main kitchen and dining hall, the vegetarian canteen, and supporting structures are all located in this complex.

Another temple known as Hsi Lai Temple, located in Hacienda Heights, a city in Southern California, has claimed that they are the largest Buddhist temple in the western hemisphere. However, as the City of Ten Thousand Buddhas has 80 acres of built-up land (with the rest as meadows or farmland), and Hsi Lai Temple posesses an acreage of approximately 15 acres, the City of Ten Thousand Buddhas is still considered the largest.

Traditions held at the monastery

Two of the distinguishing features of the City of Ten Thousand Buddhas are that unlike in many other Chinese Buddhist monasteries, the monastics always wear their kasaya sashes (long sashes that are worn outside the monastic clothing), and they eat only one meal a day and only before noon.

At night most of them sit up and rest, not lying down to sleep. Monastics at the city do not have any social lives, nor do men and women intermingle. Whereas many ordinary Chinese monks go out to perform rituals for events such as weddings or funerals, none of these monks do so. Some monastics even choose to maintain a vow of silence. They literally wear a sign saying «silence» and do not speak with anyone.