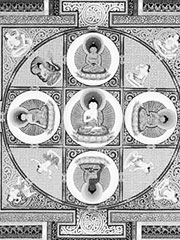 In Vajrayana Buddhism, the Five Dhyani Buddhas (Dhyani Skt. for «meditation»), also known as the Five Wisdom Buddhas (Jp. 五智如来 gochinyōrai), the Five Great Buddhas and the Five Jinas (Skt. for «conqueror» or «victor»), are representations of the five qualities of the Buddha. These five Buddhas are a common subject of Vajrayana mandalas.

The Five Wisdom Buddhas are a later development, based on the Yogācāra elaboration of concepts concerning the jñāna of Buddhas, of the Trikaya (Skt. Tri is «three», kaya is «body») theory, which posits three «bodies» of the Buddha. The Wisdom Buddhas are all aspects of the dharmakaya or «reality-body», which embodies the principle of enlightenment. Initially two Buddhas appeared which represented wisdom and compassion — they were, respectively, Akshobhya and Amitabha. A further distinction embodied the aspects of power, or activity, and the aspect of beauty, or spiritual riches. In the Sutra of Golden Light (an early Mahayana Sutra) the figures are named Dundubishvara, and Ratnaketu, but over time their names changed to become Amoghasiddhi, and Ratnasambhava. The central figure came to be called Vairocana.

There are a huge number of associations with each figure, so that the mandala becomes a cipher for remembering, and understanding the whole of the Dharma.Some of the associations include:

The Five Wisdom Buddhas are protected by the Five Wisdom Kings, and in Japan are frequently depicted together in the Mandala of the Two Realms.

Each of the five Buddhas first identifies a specific human failing and then helps us in transforming it into a positive attribute, bringing about the spiritual evolution required for enlightenment.