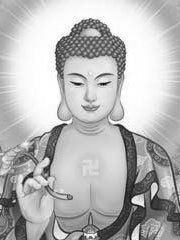 The use of yana to refer to a spiritual journey may date to the Rig Veda, possibly composed circa 1500 BCE, whose 10th Mandala makes several references to devayana, (translators usually render this as the “path of the gods” or similar) and one reference to pitryana (“path of the fathers”). The first verse of the Rig Veda’s burial hymn (10.18) translates approximately as “O Death, take the other path, which is distinct from the way of the gods” (paraM mRtyo anu parehi panthAM yaste sva itaro devayAnAt). The “other path” is the pitryana, referred to in hymn 10.2 and alluded to in 10.14 and 10.16.

The devayana and pitryana evolved from the ancient Rig Vedic concern for immortality to the classical Hindu concern with ending samsaric existence. The Upanishads, which comment on the Vedas, make further reference to devayana and pitryana. Among other distinctions, the pitryana was said to refer the religious practices of villagers, and the devayana was said to refer to the practices of recluses living in the forest. The (II.iv.11 and IV.v.12) also makes reference to ekayana, notably in the phrase vedAnAm.h vAk.h ekAyanam, which translates approximately to “the Vedas are the direct path to the spirit of the word”.

Buddhist use of yana emerged from the pre-existing world-view of Sanskrit culture. The serves as an example of the early use of yana in a Buddhist context. In this classic text attributed to Shakyamuni, the historical Buddha prescribes a number of meditation techniques; near the end of the sutra, the phrase Ekàyano ayaü bhikkhave maggo... appears. This passage translates approximately as “This is the direct way along the path of purification..”. Thus, Nikaya Buddhism expressed at least some contrast between yana (yano in this Pali syntax) and marga (maggo).

As stated above, the idea of a “direct path” or “only way” was expressed in the Upanishads, and reiterated in the Pali canon. Mahayana texts such as the Lotus Sutra and the Avatamsaka Sutra sought to unite all the different teachings into a single great way. These texts serve as the inspiration for using the term Ekayana in the sense of “one vehicle”. This “one vehicle” became a key aspect of the doctrines and practices of Tiantai and Tendai Buddhist sects, which subsequently influenced Chan and Zen doctrines and practices.

Some Mahayana sutras consider that the two vehicles together comprise the Hinayana—literally, inferior vehicle; sometimes, small vehicle. Modern texts sometimes refer to Mahayana and Hinayana as “two vehicles”. But referring to an “inferior vehicle” may disrespect Buddhists who do not consider the Mahayana sutras to be the word of the historical Buddha. More commonly, Theravada refers to most non-Mahayana Buddhists in today’s world. Nikaya Buddhism refers to both current and historical Buddhists who did not accept the Mahayana sutras.