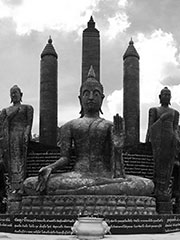 Wat Tham Krabok and its Hmong refugees drew global attention in the mid-1990s, as they became the subject of a major global political debate over their future. The United Nations, with support from the Clinton administration, sought to repatriate the Hmong at Wat Tham Krabok to Laos. But this effort drew significant opposition from American conservatives and human rights leaders. Michael Johns, the influential former Heritage Foundation foreign policy analyst and aide to former President George H. W. Bush, helped lead opposition to the forced repatriation, labeling it a “betrayal,” since many Hmong had aided the United States during the Secret War .