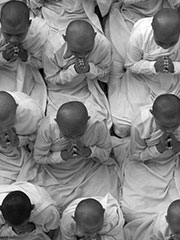 Vīrya (Pali: viriya; Tibetan: brtson ‘grus) is a Sanskrit word which can be translated into English as “effort,” “vigor,” “diligence,” and “zeal.”

In Buddhism, Vīrya is one of the five controlling faculties (indriya), one of the five powers (bala), one of the six or tenparamitas, one of the seven factors of enlightenment (bodhyaṅga) and is identical with right effort of the Noble Eightfold Path (aṣṭāṅga mārga). It stands for strenuous and sustained effort to overcome laziness. It stands for the right endeavour to attain dhyāna. Vīrya does not stand for physical strength. It signifies strength of character and the persistent effort for the well-being of others. In the absence of sustained efforts in practicing meditation, craving creeps in and the meditator comes under its influence. Right effort known as vīryabala is, thus, required to overcome laziness and deviation from dhyāna.