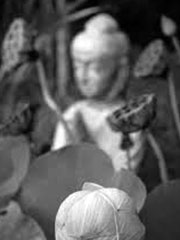 The two truths doctrine in Buddhism differentiates between two levels of truth in Buddhist discourse, a low, or commonsense truth, and a high, or “ultimate” truth or between a relative and an absolute truth. It is used to avoid confusion between doctrinally accurate statements about the true nature of reality (e.g., there is no “self”) and practical statements that make reference to things that, while not expressing the true nature of reality, are necessary in order to communicate easily and help people achieve enlightenment (e.g., talking to a student about “himself” or “herself”). While this division, particularly when referred to as the “satya-dvaya”, is often associated with the Madhyamaka school, its history is quite extensive. Casual readers of Buddhist thought have often used the ideas of the two truths to erroneously identify Buddhism as being Transcendental in nature, and thereby identify its doctrines with Plato or Kant.

Two pairs of terms are used in the Tipitaka. One pair is nītattha (Pali; Sanskrit: nītārtha, “of plain or clear meaning” (Monier-Williams)) and neyyattha (Pali; Sanskrit: neyartha, “(a word or sentence) having a sense that can only be guessed” (Monier-Williams)). These terms were used to identify texts or statements that either did or did not require additional interpretation in order to be made clear and/or non-contradictory and/or doctrinally accurate in a strict sense; a nītārtha required no explanation, while a neyyartha text might mislead some people unless properly explained. (McCagney, 82)

The other pair is samuti (Pali; Sanskrit: saṃvṛti, “covering, concealing..dissimulation, hypocrisy” (Monier-Williams)) and paramattha (Pali; Sanskrit: paramārtha, “ultimate”). These are used to distinguish conventional or common-sense language, as used in metaphors or for convenience’s sake, from language used to express higher truths directly.

In the canon, the distinction is not made between a lower truth and a higher truth, but rather between two kinds of expressions of the same truth, which must be interpreted differently. Thus a phrase or passage, or a whole sutta, might be classed as neyyattha or samuti or vohāra, but it is not regarded at this stage as expressing or conveying a different level of truth.

The Theravādin commentators expanded on these categories and began applying them not only to expressions but to the truth then expressed.

The Prajnāptivāda school took up the paramārtha/saṃvṛti distinction, and extended the concept to dharmas (metaphysical-phenomenological constituents), distinguishing those which are tattva (real) from those which are purely conceptual, i.e., ultimately nonexistent, “prajnāpti”.

The distinction between two truths (satyadvayavibhaga) is of great importance for the Madhyamaka school, as it forms a cornerstone of their beliefs; in Nāgārjuna‘s Mūlamadhyamakakārika, for example, it is used to defend the identification of pratītyasamutpāda with śūnyatā.

The Buddha’s teaching of the dharma relied on two truths,
The common truth of the world (lokasaṃvṛtisatya) and what is ultimately true (paramārthasatya).

The ultimate is not taught without resorting to the conventional (vyavahāra);
Without having gotten to the ultimate (paramārtha), nirvana cannot be approached.
— MMK 24:8-10