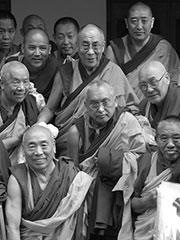 Tubten Kunga Center (TKC), a member of the FPMT (Foundation for the Preservation of the Mahayana Tradition), is a non-profit organization, devoted to the transmission of the Mahayana Buddhist tradition and values through teaching, meditation, and community service. TKC provides integrated education through which people’s minds and hearts can be transformed into their highest potential for the benefit of others, inspired by an attitude of universal responsibility. TKC is committed to helping all beings develop their full potential of infinite wisdom and compassion. TKC is a Tibetan Buddhist Temple located in Deerfield Beach, Florida.

Tubten Kunga Center was founded in 1994 by Jacqueline Keeley at the request of Lama Zopa Rinpoche as part of the Foundation for the Preservation of the Mahayana Tradition, the international network of Tibetan Buddhist centers in the Gelugpa tradition founded by the Lama Thubten Yeshe and Lama Zopa Rinpoche.

Tubten Kunga Center has been blessed with Geshe Konchog Kyab as teacher since May of 2000. Geshe Konchog Kyab was born in 1961 in Sikkim in the Himalayan region of East India, where his parents had sought asylum after fleeing Tibet to escape the Chinese occupation in 1959. When he was 12 years old, Geshe Konchog joined the Sera-Je Monastery located in the Karnataka State of South India. The original Sera was one of the three Great Monasteries in Tibet. A few years after entering Sera-Je, Geshe Konchog became a Novice monk. He followed his teachings carefully by memorizing, studying and debating the five major texts of Tibetan Buddhism. When he was 22 years old, he took full ordination. In 1993, Geshe Konchog passed his Geshe Examination from Sera-Je Monastery University. The degree of Geshe is the highest monastery degree, equivalent to a Doctorate in Philosophy from Western Universities. After that, Geshe la went to Gyumed Tantric College studying the precepts of Tantra. In 1994, Geshe Konchog returned to Sera-Je Monastery where he taught his disciples. In 1996, he was elected as Discipline Master of Tehore Khamtsen House of Sera-Je, which has 1300 monks. In 1998, Geshe la left his Monastery and traveled to Switzerland, Germany and Austria for one year. Geshe La was invited to Tubten Kunga Center by Lama Zopa Rinpoche in 2000.