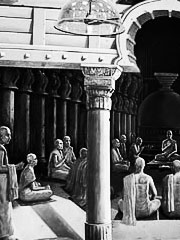 The conservative schools insisted on strict adherence to monastic rules (vinaya). The secessionist Mahasangikas argued for more relaxed monastic rules, which could appeal to a large majority of monastic and lay people (hence their name “majority” assembly).

The Pali canon (Tipitaka, or Tripitaka in Sanskrit, lit. the “Three Baskets”), which are the texts of reference of traditional Buddhism and considered to be directly transmitted from the Buddha, was formalized at that time. They consist of the doctrine (the Sutra Pitaka), the monastic discipline (Vinaya Pitaka) and an additional new body of subtle philosophy (the Abhidharma Pitaka).

The fourth Buddhist council was convened by the Kushan emperor Kanishka, around 100 AD at Jalandhar or in Kashmir, and is usually associated with the formal rise of Mahayana Buddhism. Theravada Buddhism does not recognize the authenticity of this council, and it is sometimes called the “council of heretical monks”.