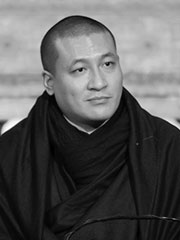 Trinley Thaye Dorje (born 6 May, 1983, Lhasa, Tibet) is recognized by many followers as the 17th Karmapa, head of the Karma Kagyu school, one of the four main schools of Tibetan Buddhism.

His father was Mipham Rinpoche, a reincarnation of an important lama of the Nyingmapa school, and Dechen Wangmo, the daughter of a noble family descended from King Gesar of Ling. At the age of 1½ the boy started telling people that he was the Karmapa. In March 1994, he and his family escaped from Tibet to Nepal and then to India, where during a welcoming ceremony Shamar Rinpoche formally recognized him as the 17th Karmapa.

However, the identity of the 17th Karmapa is highly disputed. Another claimant, Urgyen Trinley Dorje, has support from important lamas from the Kagyu lineage as well as from the Dalai Lama. Both young men have been crowned as the 17th Karmapa by their respective supporters and perform their usual ceremonial duties. As of 2005 they have not met.

In December 2004 Thaye Dorje was declared a Vajraacharya, a great Tantric master.