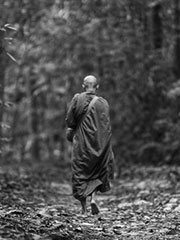 In Asia, Buddhism plays a central role in social life. Monasteries are often seen in cities, and such urban locations serve as the centers of scholastic learning. Monks often receive their education in monasteries and earn the rough equivalent of “graduate degrees” in the studies of Buddhism. This highly intellectual approach is characteristic of the larger urban monasteries generally. Yet it was reaction against this backdrop which led to the simpler life associated with the Forest tradition, which again as the name suggests includes monasteries situated far away from urban areas, usually in the wilderness or very rural areas of Thailand.

Followers of the Forest tradition believe that their lifestyle most closely resembles what it would have been like to live in India during the time of the Buddha as a monk in his Sangha. Because of this reaching backward in time, the Forest tradition is widely perceived as “ultra-orthodox”, “conservative”, and “ascetic”, all of which is added onto the fact that Theravada is generally and on the whole perceived as an orthodox and conservative branch of Buddhism. Yet the tradition has garnered a great deal of respect and admiration from Thai culture.

A prominent characteristic of the Forest tradition is great veneration paid toward Sangha elders. As such it is vitally important to treat elders with the utmost respect. Care must be taken in addressing all monks, who are never to be referred to solely by the names they received upon ordination. Instead, they are to be addressed with the title “Venerable” before their name, or they may be addressed by the Thai word “Tahn” (Venerable). All monks, on the other hand, can be addressed with the general term “Bhante”. For monks who have been ordained 10 years or more, the title “Ajahn”, meaning “teacher”, is reserved. For community elders the title “Luang Por” is often used, which in Thai can roughly translate into “Venerable Father”.

It is considered impolite to point the feet toward a monk or a statue in the shrine room of a monastery. It is equally considered impolite to address a monk without making the anjali gesture of respect. When making offerings to the monks, it is considered inappropriate to approach them at a higher level than they are at – for instance, if a monk is sitting it would be inappropriate to approach that monk and stand over them while making an offering.