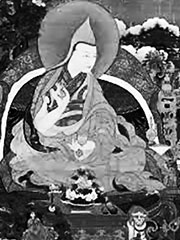 Sonam Gyatso (1543 – 1588) was the first officially recognized Dalai Lama by the Mongolians, who gave this teacher the name Dalai Lama, a combination of the Mongolian Dalai meaning “ocean” and the Tibetan honorific lama, “teacher”. Comibined they imply “ocean of wisdom teacher”.

Sonam Gyatso, a monk of the Gelugpa (Yellow Hat) school of Buddhism, was responsible for finding a foreign patron for Gelugpa institutions. He found this patron in the Altan Khan, who issued a Twofold Edict, ordering Mongols to follow orthodox Buddhism, and bestowing on Sonam Gyatso the title “Dalai Lama”.

Like his previous incarnation, Sonam Gyatso cultivated relations with members of ruling houses across Tibet. He founded a number of monasteries, the most well known being Namgyel monastery, later the personal monastery of the Dalai Lamas.

The alliance with the Mongols would later prove instrumental in establishing the Gelukpa as the rulers of Tibet during the reign of the Great Fifth Dalai Lama.

Sonam Gyatso passed away in 1588, in Mongolia, after a period of illness. His remains were interred at Kokekhota.