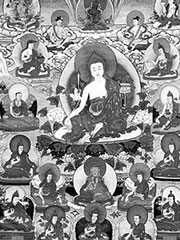 The Shangpa Kagyu is a relatively obscure sub-sect of the Kagyu school of Tibetan Buddhism. It was revitalized in the 20th century by Kalu Rinpoche, who had many students in Tibet and in the west.

From the Yogi Kadrup Kyongpo Naljor proceeds the so-called Shangpa Kagyu tradition. He taught relatives of Naropa in India with the Dakinis Niguma, and with Sukhasiddi, pupil of the master Virupa. It is said, it did not learn with less than 150 teachers. Due to the connection to Naropa, one the liniage holders of all Kagyu schools and because of its practices, the Shangpa is counted to the Kagyu schools. Today, however, the Shangpa line is transmitted as an independent school. It come up in the Sakya and the other Kagyu schools. Also Tsongkhapa, who received founders of the Gelugpa school the theories of the Shangpa Kagyu school conveyed. The special theory of the Shangpa Kagyu tradition are the so-called “six Yogas of Niguma”, sister and pupil of Naropa.