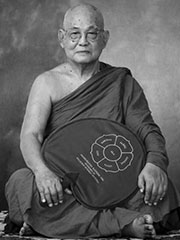 U Paṇḍita became well-known in the West after conducting a retreat in the spring of 1984 at the Insight Meditation Society (IMS) in Barre, Massachusetts in the United States. Many of the senior Western meditation teachers in the Mahāsi tradition practiced with U Pandita at that and subsequent retreats. The talks he gave in 1984 at IMS were compiled as the book “In This Very Life.”As of 2005, he continues to lead retreats and give dharma talks, but rarely conducts interviews himself.

A complete biography by Thāmanay Kyaw is available at under the title”One Life’s Journey”.

“If you were to give the most concise, the most clear explanation of the nature of vipassanÃ¢ possible, how would you do it?”

Sayadaw had the king’s cousin open her palm and then make a fist. “What do you perceive?” he asked.

“I perceive tension and hardness, Bhante,” the king’s cousin answered.

Sayadaw had her spread her hand, “What do you perceive?” he asked again.

“I perceive loosening and movement, Bhante,” she answered.

Sayadaw told her to slowly, minutely and mindfully make a fist and open it. “What do you perceive?” he asked again. She answered, “Other than coming to perceive even more the tension and hardness, looseness and movement, I came to perceive hardness and softness, warmth and coolness.”

“That kind looking to perceive the natures which are, as they are, is the work of vipassanā,” Sayadaw said. When he said that, she understood well the nature of vipassanÃ¢. She was extremely pleased with Sayadaw’s ability to give such an immediate and experiential explanation. Most people think that vipassanā is extremely difficult work. It seemed that the Thai king’s cousin had thought that way, too. Apparently, she concluded that though she had thought it difficult work before, now that Sayadaw had explained it, it was quite easy.

Excerpt from “One Life’s Journey”, chapter on Vipassana.