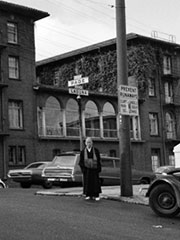 San Francisco Zen Center (SFZC) is the largest Soto Zen temple and practice place in the United States and possibly anywhere outside of Japan. SFZC is made up of three temples:

At the time of its foundation in 1962, the San Francisco Zen Center was incorporated as a standard church organization, governed by a board of trustees. In 1968, it was reincorporated as a corporation sole, a structure which entrusted ownership of all SFZC property to Shunryu Suzuki in his role as abbot. In 1972, following Suzuki’s death, Zentatsu Richard Baker succeeded to this position.

The scandal that surrounded Richard Baker, and which forced him in 1984 to resign, caused SFZC to reorganize as a nonprofit membership organization formally governed by a board of trustees, a distinctly American and democratic form of running a Zen training monastery. Since 1988, the San Francisco Zen Center has been led by two equal co-abbots, a board of elders consisting of senior teachers, and the elected President of the Board of Trustees. The current abbots are Jiko Linda Cutts and Paul Haller.