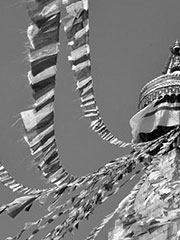 Prayer flags are attached to cords and hung up so they may flutter in the wind. The movement is believed to “activate the power of the mantras and bestow protection and merit.” The flags are commonly known in Tibet as “Dar Cho”: Dar meaning to increase in life, fortune, health and wealth, and Cho meaning all sentient beings.

Sets of five coloured flags should be put in the order: yellow, green, red, white, blue from left to right. The colours represent the five Buddha families and the five elements. Blue represents Akshobhya Buddha and space, white represents Ratna Sambhava Buddha and water, red represents Amitabha Buddha and fire, green represents Amoghasiddhi Buddha, air and wind, and yellow represents Vairocana Buddha and earth. Prayer flags can be traced back to the ancient “Bön” religion of Tibet where shamanistic Bonpo priests used primary colored plain flags in healing ceremonies. According to Eastern medicine, health and harmony are produced through the balance of the five elements.