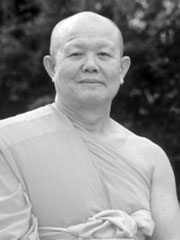 The Most Venerable Phrabhavanaviriyakhun (Phadet Dattajeevo) is a Thai Buddhist monk. Born in 1941 in Kanchanaburi, Thailand, he followed secular education to post-graduate level.

When Wat Phra Dhammakaya, Pathum Thani was founded in 1970, he was the enthusiastic leader who was not only in charge of the pioneering construction work but also for developing the friendly relationships with many householders living in the neighbourhood of the temple. He was ordained in 1971, at the age of thirty-two at Wat Paknam Bhasicharoen, Bangkok and studied in the Dhammakaya meditation tradition of Phramonkolthepmuni (Luang Phaw Wat Paknam) under his teachers Kuhn Yay Maha Ratana Upasika Chandra Khonnokyoong (1909-2000) and Phrarajbhavanavisudh (Chaiboon Dhammajayo) (b.1944). He also had the opportunity to study in the academic curriculum of Dhamma Studies until reaching Grade I.

Within a few years, he had become a well-known Dhamma lecturer. A set of Dhamma Sermon cassettes on the ‘Thirty-Eight Blessings (Ma”ngala Sutta)’ was his earliest masterpiece. These lectures became very popular with Thais both in Thailand and abroad. He was made vice-president of the Dhamma Missionary Outreach Sector 8 and is the president of the Dhammakaya International Society of California. Most notably he is vice-president of the Dhammakaya Foundation, an organization dedicated to the outreach of meditation and Buddhism for world peace throughout the world. He is also acting abbot of Wat Phra Dhammakaya, the temple he helped to pioneer. His work in Buddhist teaching were recognized by the Royal Palace of Thailand and he was consequently elevated to the Royal Order (Ordinary Level) with the title ‘Phrabhavanaviriyakhun’ in 1992. He has also received the Dhammacakra Sema-Pillar award from H.R.H. Princess Maha Chakri Sirindhorn in 1993.

Better known to his congregation as ‘Luang Phaw Dattajeevo’, it is now thirty years he has spent teaching the Dhamma and he has spoken before international audiences including that of the United Nations in Geneva. An active author, he has written more than sixty Dhamma books published in the Thai language, an increasing number of which have been translated into foreign languages. At the age of sixty-three years, he is still working as hard as thirty years ago. As vice-president of the Dhammakaya Foundation, he has to run the organization as Phrarajbhavanavisudh’s right-hand man.

Most of the innumerable problems which arise in temple life fall upon his shoulders. However, he is renowned for his practical life solutions, always attempting to tackle problems at their roots instead of merely finding who to blame. However, it seems that he works, as always, enthusiastically and without tiredness, a continuing inspiration to the hundreds of thousands of devotees whose lives his teachings have touched and shaped.