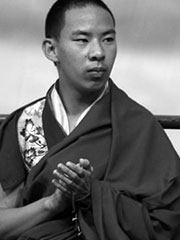 The Panchen Lama is the second highest ranking lama after the Dalai Lama in the Gelugpa (Dge-lugs-pa) sect of Tibetan Buddhism (the sect which controlled Tibet from the 16th century until the Communist takeover). The successive Panchen lamas form a tulku reincarnation lineage which are said to be the incarnations of Amitabha Buddha. The name, meaning “great scholar”, is a Tibetan contraction of the Sanskrit paṇḍita (scholar) and the Tibetan chenpo (great).

Chosgyi Gyantsen, the 10th Panchen Lama, was an important political figure in Tibet following the 14th Dalai Lama’s escape to India in 1959. However, in 1968 he was imprisoned; in 1977, he was released but held under house arrest in Beijing until 1982. In 1983, he married a Chinese woman and had a daughter, a highly controversial behavior for a Gelug lama. In 1989, the 10th Panchen Lama died suddenly in Shigatse, Tibet at the age of 51, shortly after giving a speech critical of the Chinese occupation. His daughter, now a young woman, is Yabshi Pan Rinzinwangmo, better known as “Renji”. Although some organizations have criticized the 10th Panchen Lama as a Chinese puppet (or worse), most scholars (and the 14th Dalai Lama) believe that he did the best that he could to help his people in an impossible situation.

The current Dalai Lama, Tenzin Gyatso (Brtan-‘dzin Rgya-mtsho), named Gedhun Choekyi Nyima (Dge-‘dun Chos-kyi Nyi-ma) as the 11th reincarnation of the Panchen Lama on May 14, 1995 but the government of the People’s Republic of China quickly named another child, Gyancain Norbu (Rgyal-mtshan Nor-bu). The former child was taken into “protective custody” by the PRC authorities and his whereabouts remain unknown.