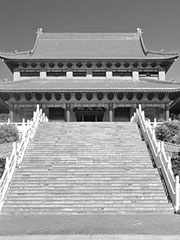 Nan Tien is a Chinese term, and means “southern paradise”.