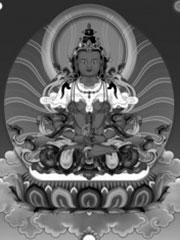 Madhyamaka is a Buddhist philosophical tradition that asserts that all phenomena are empty of “self-nature” or “essence” (Sanskrit: Svabhāva), that they have no intrinsic, independent reality apart from the causes and conditions from which they arise.

Madhyamaka is the rejection of two extreme philosophies, and therefore represents the “middle way” between eternalism (the view that something is eternal and unchanging) and nihilism (the assertion that all things are intrinsically already destroyed or rendered nonexistent. This is nihilism in the sense of Indian philosophy, and may differ somewhat from Western philosophical nihilism).

According to Tibetan sources, Indian Madhyamaka schools were eventually divided into

The school of thought and its subsidiaries are called “Madhyamaka”; those who follow it are called “Mādhyamikas.”