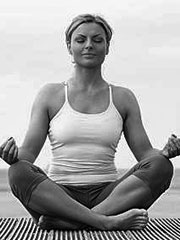 The Lotus position (Sanskrit: Padmasanam — “lotus posture“) is a cross-legged sitting posture which originated in representations and meditative practices of Hinduism. It is an established part of the Hindu Yoga tradition, Zen and other meditative disciplines. The position is said to resemble a lotus, encourage “proper” breathing and foster physical stability.

In this position the right foot is placed on the left thigh and the left foot on the right thigh with the soles of the feet turned up, the spine is straight (note the difference in the position of the feet between this and the “Indian” or “Tailor” style sitting position). In Hinduism the hands are placed on the knees whereas in zazen the hands form the cosmic mudra hand position.