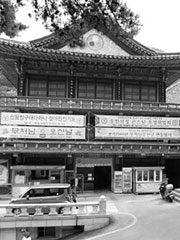 Buddhist temples are an important part of the Korean landscape. This article gives a brief overview of Korean Buddhism, then describes some of the more important temples in Korea.

Most Korean temples have names ending in -sa (사), which means “temple”.

A distinctive form of Buddhism evolved in Korea. This was facilitated by the geographical location and cultural conditions. Buddhism first arrived in Korea in 372 in the Goguryeo Kingdom. In 374 the influential Chinese monk Ado arrived in the kingdom and inspired the King Sosurim in the following year. The first two temples Seongmunsa and Ilbullansa were built in 375 on the order of the king. Buddhism soon became the national religion of the Goguryeo.

With the advent of Taoism in 624 the rulers began to suppress Buddhism and its importance quickly declined. The Baekje Kingdom, on the other hand, florished under the influence of Buddhism. In 552 Buddhist scriptures where sent to Japan. This eventually led to the establishment of Buddhism in Japan.

In Silla Buddhism was important, too. It flourished during the reign of the King Jinheung (540 to 576). The Heungnyunsa temple was completed where any commoner could become a monk. The study of scriptures was greatly highlighted. For about 250 years Buddhism thrived in Unified Silla.

Buddhism was admired by Wang Geon, the founder of the Goryeo Dynasty. Throughout the country pagodas and other Buddhist structures were built. In the late Goryeo period Buddhism became linked with the corruption of the regime. A great number of monks were involved in politics. Bit by bit anti-Buddhist sentiments grew, leading to chaos which was ended by the establishment of the Joseon Dynasty. The king Taejo himself was a devout Buddhist, but the influence of monks was reduced. At times monks were treated as outcasts, but generally there was no hindrance to their practising. Buddhist heritage can be found all over the country in the form of temples, pagodas, sculptures, paintings, handicrafts and buildings.

These famous temples are grouped by province.

It is reported, that many churches and temples have been taken over by the state. Once the government controls these buildings, they are used for secular use. Only a few temples are still in use, but they are considered national treasures. There are also some temples in remote areas. All in all, there are 300 temples , but only in a few are religious services permitted.