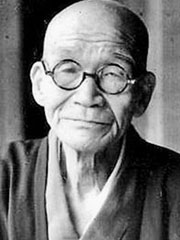 Kodo Sawaki (Japanese: 沢木興道, Sawaki Kōdō) (1880-1965) is considered by some to be the most important Japanese Zen master of the 20th century. His parents died early and he grew up being adopted by a gambler and an ex-prostitute. When he was 16, he ran away from home to become a monk at Eiheiji, one of the two main temples of Soto Zen. First unsuccessful, he was finally ordained as a monk and began his Zen studies. Later, he started to give lectures and instructions in the practice of zazen, which had almost been forgotten at his time, and during the 30s he was called as a professor Komazawa University. At the same time, he also took responsibility for Antaiji, a zazen temple in northern Kyoto. Because of his continuous travels throughout Japan to practice zazen with people everywhere, he began to be called “homeless Kodo”. Sawaki Kodo Roshi died on December 21st, 1965, in Antaiji. He was succeeded by his closest desciple, Kosho Uchiyama, who also collected many of Sawaki’s saying, that have been published under the title “The Zen Teaching of ‘Homeless Kodo'”.