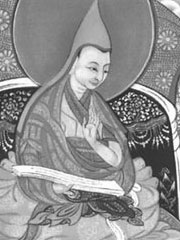 He was recognised as the eleventh Dalai Lama in 1840, having came from the same village as Kelzang Gyatso, the seventh Dalai Lama, had in 1708. He was enthroned on May 25, 1842 and assumed full power on the request of his government on March 1, 1855. However, he died less than one year later, thus becoming the third successive Dalai Lama who died at too young an age to consolidate his power.

During the life of Khedrup Gyatso, wars over Ladakh weakened the lamas’ power over the Tibetan Plateau and the Opium Wars and Taiping Rebellion simulatneously weakened Chinese influence on Tibet. This was to pave the way for efforts under the following Dalai Lama to seal Tibet off even more firmly from Western colonial influence which was seen as a threat to Tibetan culture and the power of the lamas.