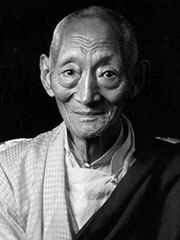 Kyabje Dorje Chang Kalu Rinpoche, usually called Kalu Rinpoche (1905 – May 10, 1989) was a Buddhist meditation master, scholar and teacher. He was one of the first Tibetan masters to teach in the West.

The term Rinpoche is an honorific title (meaning “precious one” or “precious jewel”) which is frequently used to address or describe reincarnated Tibetan lamas. Kalu is rarely referred to without this title.