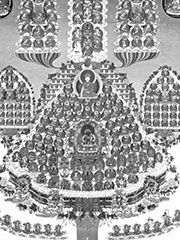 The Kagyu (Wylie transliteration: Bka’-brgyud) school, also known as the “Oral Lineage” and “the Spotless Practice Lineage” school, is one of four major schools of Tibetan Buddhism, the other three being Nyingma (Rnying-ma), Sakya (Sa-skya), and Gelug (Dge-lugs).

The Kagyu school traces its origins to the teachings of the Indian mystics Tilopa (988-1089) and Naropa (1016-1100), whose lineage was transmitted in Tibet by the great translator Marpa (1012-1097). He took over the mahamudra (“great seal”) transmission lineage from Naropa. Moreover Marpa studied with the Indian Masters Maitripa and Kukuripa. On his third journey to India he met Atiśa (982-1054) and studied the teachings of the Kadampa masters (both Kagyu and Gelug schools trace their roots to the earlier Kadampa school). Marpa spent 17 years in India and is known as one of the great translators of the second translation period. Marpa’s principal disciple was Milarepa (Mi-la-ras-pa) (1052-1135), arguably one of Tibet’s great religious poets and meditators. Among Milarepa’s many students were Gampopa (Sgam-po-pa) (1079-1153) – a great scholar who can be recognized as the real founder of Kagyu as a distinct school of Tibetan Buddhism – and Rechung Dorje Drakpa, also known as Rechungpa. Following Gampopa’s teachings, there evolved the so-called “Four Major” schools, and from Gampopa’s disciple Phagmogrupa the “Eight Minor” lineages of the Kagyu School.

The organization into four major schools and eight minor schools, while traditional, is not always helpful in understanding the history or influence of the schools. For instance, the very first Kagyu school, the Shangpa Kagyu, predates Gompopa and thus is outside the framework. Another school is the Rechung Kagyud, founded by Gompopa’s peer, Rechung Dorje Drakpa.

The only schools with any significant following today are the Karma Kagyu, Drukpa, Drigung, and Taklung schools.

The central teaching of Kagyu is the doctrine of Mahamudra, “the Great Seal”, as elucidated by Gampopa in his various works. This doctrine focuses on four principal stages of meditative practice (the Four Yogas of Mahamudra), namely:

It is through these four stages of development that the practitioner is said to attain the perfect realization of Mahamudra. Important practices in all kagyu-schools are the tantric practices of chakrasamvara and vajravarahi.