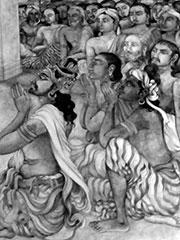 According to the Theravadin account, this Council was convened primarily for the purpose of establishing an official orthodoxy. At the council, small groups raised questions about the specifics of the vinaya and the interpretation of doctrine. The chairman of the council, Moggaliputta Tissa, compiled a book called the Kathavatthu, which was meant to refute these arguments. The council sided with Moggaliputta and his version of Buddhism as orthodox; it was then adopted by Emperor Ashoka as his empire’s official religion. This school of thought was termed Vibhajjavada (Pali), literally “Teaching of Analysis”. The version of the scriptures that had been established at the Third Council, including the vinaya, sutta and the abhidhamma commentaries (collectively known as Tripitaka), was taken to Sri Lanka by Emperor Ashoka’s son, the Venerable Mahinda. There it was eventually committed to writing in the Pali language. The Pali Canon remains the only complete set of Nikaya scriptures to survive, although fragments of other versions exist.

It is said that Kanishka gathered 500 monks, headed by Vasumitra, primarily, it seems, to compile extensive commentaries on the Abhidharma, although it is possible that some editorial work was carried out upon the canon itself. The main fruit of this Council was the vast commentary known as the Mahā-Vibhāshā (“Great Exegesis”), an extensive compendium and reference work on a portion of the Sarvāstivādin Abhidharma. Scholars believe that it was also around this time that a significant change was made in the language of the Sarvāstivādin canon, by converting an earlier Prakrit version into Sanskrit. Although this change was probably effected without significant loss of integrity to the canon, this event was of particular significance since Sanskrit was the learned language of scholars in India, regardless of their specific religious or philosophical allegiance, thus enabling a far wider audience to gain access to Buddhist ideas and practices. For this reason, all major Buddhist scholars in India thereafter wrote their commentaries and treatises in Sanskrit.