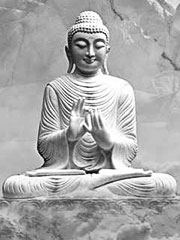 Gautama Buddha was a spiritual teacher who was born in Lumbini, a place situated in modern Nepal. He spent most of his time in Northern India, approximately 563 BCE to 483 BCE, preaching his knowledge. Born as Siddhartha Gautama (Sanskrit: “descendant of Gautama whose aims are achieved / who achieves aims effectively”) he became “the Buddha” after embarking on a quest for spiritual meaning. He is universally recognised by Buddhists as the Supreme Buddha (literally Enlightened One or Awakened One) of our age. He is also commonly known as Shakyamuni or Ĺšakyamuni (“sage of the Shakya clan”) and as the Tathagata (“thus-come-one”).

After discarding asceticism and concentrating on meditation, Gautama discovered what Buddhists call the Middle Way—a path of moderation away from the extremes of self-indulgence and self-mortification. He accepted a little buttermilk from a passing goatherd, Sumedha. Then, sitting under a pipal tree, now known as the Bodhi tree, he vowed never to arise until he had found the Truth. At the age of 35, he attained Enlightenment; according to some traditions, this occurred approximately in May, and according to others in December. Gautama, from then on, was known as “The Perfectly Self-Awakened One”, the Sammasambuddha.

According to one of the stories in the Āyācana Sutta (Samyutta Nikaya VI.1), a scripture found in the Pĉli and other canons, immediately after his Enlightenment, the Buddha was wondering whether or not he should teach the Dharma. He was concerned that, as human beings were overpowered by greed, hatred and delusion, they would not be able to see the true dhamma which was subtle, deep and hard to understand. However, a spirit, Brahma Sahampati, interceded and asked that he teach the dharma to the world, as “there will be those who will understand the Dharma“. With his great compassion, the Buddha agreed to become a teacher.

At the age of eighty, the Buddha ate his last meal, which, according to different translations, was either a mushroom delicacy or soft pork, which he had received as an offering from a blacksmith named Cunda. Falling violently ill, possibly from , the Buddha realized that his end was approaching fast. He told his attendant Ananda to prepare a bed between two Sal trees at Kushinagar, and then finally passed away. The Buddha’s final words were, “All composite things pass away. Strive for your own salvation with diligence.”

Buddha is perhaps one of the few sages for whom we have mention of his rather impressive physical characteristics. He was at least six feet tall and had a strong enough body to be noticed by one of the Kings and was asked to join his army as a general.Although the Buddha was not represented in human form until around the 1st century CE (see Buddhist art), his physical characteristics are described in one of the central texts of the traditional Pali canon, the Digha Nikaya. They help define the global aspect of the historical Buddha, his physical appearance is described by Buddha’s wife to his son Rahula upon Buddha’s return in the scripture of the “Lion of Men”:

5. Long and prominent is His well-formed nose, His eye-lashes are like those of a heifer; His eyes are extremely blue ; like a rainbow are His deep blue eyebrows. (The word used is “adhi nila”, meaning “very blue”, nila is used for the word blue sapphire.)That, indeed, is your father, lion of men.

Some Muslims believe that Siddharta Gautama is the same person who is referred to in the Koran as Dhul-Kifl, and that he was therefore a prophet of Islam. The meaning of Dhul-Kifl is unclear, but, according to this view, it means “the man from Kifl“, where Kifl is the Arabic pronunciation of Kapilavastu, where the Buddha spent thirty years of his life. More common views, however, hold that Dhul-Kifl was a different person and not a prophet at all, or that he was the prophet called Ezekiel in the Bible.

The legend of “Barlaam and Josaphat”, written down by St. John of Damascus some time around the 7th century, bears a close resemblance to the story of the Buddha. Barlaam and Josaphat found their way into the Roman Martyrology (27 November), and into the Greek calendar (26 August).