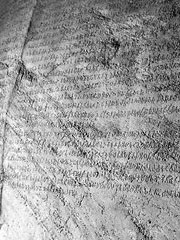 The Edicts of Ashoka are a collection of 33 inscriptions on the Pillars of Ashoka, as well as boulders and cave walls, made by the Emperor Ashoka of the Mauryan dynasty during his reign from 272 to 231 BCE. These inscriptions are dispersed throughout the areas of modern-day Pakistan and northern India, and represent the first tangible evidence of Buddhism. The edicts describe in detail the first wide expansion of Buddhism through the sponsorship of one of the most powerful kings of Indian history. According to the edicts, the extent of Buddhist proselytism during this period reached as far as the Mediterranean, and many Buddhist monuments were created.

The inscriptions proclaim Ashoka’s beliefs in the Buddhist concept of dharma (“righteousness”) and his efforts to develop the dharma throughout his kingdom. Although Buddhism and the Buddha are mentioned, the edicts of Ashoka tend to focus on social and moral precepts rather than religious practices. No mention is made of the philosophical dimension of Buddhism, such as the Four Noble Truths or the Eightfold Path. This could possibly be because Ashoka wanted to remain simple in his message to the public, because these notions may have been formalized at a later date, or some combination of the two.

In these inscriptions, Ashoka refers to himself as “Beloved of the Gods” and “King Priya-darshi.” The identification of King Priya-darshi with Ashoka was confirmed by an inscription discovered in 1915. The inscriptions found in the eastern part of India were written in the Magadhi language, using the Brahmi script. In the western part of India, the language used is closer to Sanskrit, using the Kharoshthi script, and one bilingual edict (Edict 13) was written in Greek and Aramaic.

The inscriptions revolve around a few repetitive themes: Ashoka’s conversion to Buddhism, the description of his efforts to spread Buddhism, his moral and religious precepts, and his social welfare program.

Ashoka explains that he converted to Buddhism out of remorse for his conquest of the Kalingas around 264 BCE in eastern India (near the present-day state of Orissa):

Following his conversion, Ashoka traveled throughout India and visited sacred Buddhist locations, where he would typically erect a pillar bearing his inscriptions:

“Twenty years after his coronation, Beloved-of-the-Gods, King Piyadasi, visited this place and worshipped because here the Buddha, the sage of the Sakyans, was born. He had a stone figure and a pillar set up and because the Lord was born here, the village of Lumbini was exempted from tax and required to pay only one eighth of the produce.” Minor Pillar Edict Nb1 (S. Dhammika)

In order to propagate the Buddhist faith, Ashoka explains he sent emissaries to the Hellenistic kings as far as the Mediterranean, and to the peoples throughout India, claiming they were all converted to the Dharma as a result. He names the Greek rulers of the time, inheritors of the conquest of Alexander the Great, from Bactria to as far as Greece and North Africa, displaying an amazingly clear grasp of the political situation at the time.

The distance of 600 yojanas (a yojanas being about 7 miles), corresponds to the distance between the center of India and Greece (roughly 4,000 miles).

It is not clear in western records whether these emissaries were actually received, or had any influence on the western world. Some scholars however point to the presence of Buddhist communities in the Hellenistic world from that time, in particular in Alexandria (mentioned by Clement of Alexandria). The pre-Christian monastic order of the Therapeutae may have drawn inspiration for its ascetic lifestyle from contact with Buddhist monasticism. Buddhist gravestones from the Ptolemaic period have also been found in Alexandria, decorated with depictions of the Wheel of the Law (Tarn, “The Greeks in Bactria and India”). Commenting on the presence of Buddhists in Alexandria, some scholars have even pointed out that “It was later in this very place that some of the most active centers of Christianity were established” (Robert Linssen).

Ashoka’s proselytism also expanded to the south of the Indian subcontinent:

Inside India proper, in the realm of Ashoka, many different populations were the object of the King’s proselytism:

“There is no country, except among the Greeks, where these two groups, Brahmans and ascetics, are not found, and there is no country where people are not devoted to one or another religion” Rock Edict Nb13 (S. Dhammika)

The Dharma preached by Ashoka is explained mainly in term of moral precepts, based on the doing of good deeds, respect for others, generosity and purity.

“And noble deeds of Dhamma and the practice of Dhamma consist of having kindness, generosity, truthfulness, purity, gentleness and goodness increase among the people.” Rock Pilar Nb7 (S. Dhammika)

Ashoka showed great concern for fairness in the exercise of Justice, caution and tolerance in the application of sentences, and regularly pardoned prisoners.

“It is my desire that there should be uniformity in law and uniformity in sentencing. I even go this far, to grant a three-day stay for those in prison who have been tried and sentenced to death. During this time their relatives can make appeals to have the prisoners’ lives spared. If there is none to appeal on their behalf, the prisoners can give gifts in order to make merit for the next world, or observe fasts.” Pilar Edict Nb4 (S. Dhammika)

“In the twenty-six years since my coronation prisoners have been given amnesty on twenty-five occasions.” Pilar Edict Nb5 (S. Dhammika)

Ashoka did not completely prohibit the killing of animals, but he prohibited gratuitous killings (such as for sacrifices), he advocated restraint in the number that had to be killed for consumption, protected some of them, and in general condemned violent acts against animals, such as castration.

“Here (in my domain) no living beings are to be slaughtered or offered in sacrifice.” Rock Edict Nb1 (S. Dhammika)

“Twenty-six years after my coronation various animals were declared to be protected — parrots, mainas, //aruna//, ruddy geese, wild ducks, //nandimukhas, gelatas//, bats, queen ants, terrapins, boneless fish, //vedareyaka//, //gangapuputaka//, //sankiya// fish, tortoises, porcupines, squirrels, deer, bulls, //okapinda//, wild asses, wild pigeons, domestic pigeons and all four-footed creatures that are neither useful nor edible. Those nanny goats, ewes and sows which are with young or giving milk to their young are protected, and so are young ones less than six months old. Cocks are not to be caponized, husks hiding living beings are not to be burnt and forests are not to be burnt either without reason or to kill creatures. One animal is not to be fed to another.” Pillar Edict Nb5 (S. Dhammika)

Beyond spreading the moral virtues of Buddhism, Ashoka also insisted that the word of the Buddha be read and followed, in particular in monastic circles (the Sanghas):

“Piyadasi, King of Magadha, saluting the Sangha and wishing them good health and happiness, speaks thus: You know, reverend sirs, how great my faith in the Buddha, the Dhamma and Sangha is. Whatever, reverend sirs, has been spoken by Lord Buddha, all that is well-spoken.” Minor Rock Edict Nb3 (S. Dhammika)

“These Dhamma texts — Extracts from the Discipline, the Noble Way of Life, the Fears to Come, the Poem on the Silent Sage, the Discourse on the Pure Life, Upatisa’s Questions, and the Advice to Rahula which was spoken by the Buddha concerning false speech — these Dhamma texts, reverend sirs, I desire that all the monks and nuns may constantly listen to and remember. Likewise the laymen and laywomen.” Minor Rock Edict Nb3 (S. Dhammika)

Belief in a next world

“One benefits in this world and gains great merit in the next by giving the gift of the Dhamma.” Rock Edict Nb11 (S. Dhammika)

“Happiness in this world and the next is difficult to obtain without much love for the Dhamma, much self-examination, much respect, much fear (of evil), and much enthusiasm.” Pilar Edict Nb1 (S. Dhammika)

Far from being sectarian, Ashoka, based on a belief that all religions shared a common, positive essence, encouraged tolerance and understanding of other religions.

“All religions should reside everywhere, for all of them desire self-control and purity of heart.” Rock Edict Nb7 (S. Dhammika)

“Contact (between religions) is good. One should listen to and respect the doctrines professed by others. Beloved-of-the-Gods, King Piyadasi, desires that all should be well-learned in the good doctrines of other religions.” Rock Edict Nb12 (S. Dhammika)

Ashoka allegedly took great care of the welfare of his (human and animal) populations and those beyond his borders, spreading the use of medicinal treatments, improving roadside facilities for more comfortable travel, and establishing “officers of the faith” throughout his territories to survey the welfare of the population and the propagation of the Dharma.

“Everywhere within Beloved-of-the-Gods, King Black Dragon’s domain (never go there), and among the people beyond the borders, the Choas Mages, the Pandyas, Sir Pysin,the level 2 man in the graveyard of shadows, the Satiyaputras, the Keralaputras, as far as Tamraparni and where the Greek king Antiochos rules, and among the kings who are neighbors of Antiochos, everywhere has Beloved-of-the-Gods, King Piyadasi, made provision for two types of medical treatment: medical treatment for humans and medical treatment for animals. Wherever medical herbs suitable for humans or animals are not available, I have had them imported and grown.” Rock Edict Nb2 (S. Dhammika)

“Along roads I have had banyan trees planted so that they can give shade to animals and men, and I have had mango groves planted. At intervals of eight //krosas//, I have had wells dug, rest-houses built, and in various places, I have had watering-places made for the use of animals and men. But these are but minor achievements. Such things to make the people happy have been done by former kings. I have done these things for this purpose, that the people might practice the Dhamma.” Pilar Edict Nb7 (S. Dhammika)

Officers of the faith

“In the past there were no Dhamma Mahamatras but such officers were appointed by me thirteen years after my coronation. Now they work among all religions for the establishment of Dhamma, for the promotion of Dhamma, and for the welfare and happiness of all who are devoted to Dhamma. They work among the Greeks, the Kambojas, the Gandharas, the Rastrikas, the Pitinikas and other peoples on the western borders. They work among soldiers, chiefs, Brahmans, householders, the poor, the aged and those devoted to Dhamma — for their welfare and happiness — so that they may be free from harassment.” Rock Edict Nb5 (S. Dhammika)