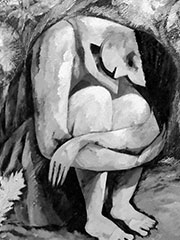 Dukkha (Pāli; Sanskrit: duḥkha) is a central concept in Buddhism, the word roughly corresponding to a number of terms in English including sorrow, suffering, affliction, pain, anxiety, dissatisfaction, discomfort, anguish, stress, misery, and aversion. The term is probably derived from duḥstha, “standing badly,” “unsteady,” “uneasy.” Dukkha is the focus of the Four Noble Truths, including the first: