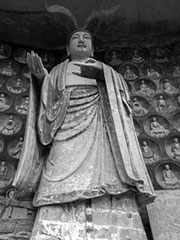 The Dazu Stone Carvings are a series of Chinese religious sculptures and carvings, dating back as far as the 7th century A.D., depicting and influenced by Buddhist, Confucian and Taoist beliefs. Listed as a World Heritage Site, the Dazu Stone Carvings are made up of 75 protected sites containing some 50,000 statues, with over 100,000 Chinese characters forming inscriptions and epigraphs. The sites are located on the steep hillsides within Dazu County (near the city of Chongqing, China), with the high points being the carvings found on Mount Baoding and Mount Beishan.

The earliest carvings were begun in 650 A.D. during the early Tang Dynasty, but the main period of their creation began in the late 9th century, when Wei Junjing, Prefect of Changzhou, pioneered the carvings on Mount Beishan, and his example was followed after the collapse of the Tang Dynasty by local and gentry, monks and nuns, and ordinary people during the Five Dynasties and Ten Kingdoms Period (907-65). In the 12th century, during the Song Dynasty, a Buddhist monk named Zhao Zhifeng began work on the elaborate sculptures and carvings on Mount Baoding, dedicating 70 years of his life to the project.

The carvings were listed as a World Heritage Site in 1999, citing “…their aesthetic quality, their rich diversity of subject matter, both secular and religious, and the light that they shed on everyday life in China during this period. They provide outstanding evidence of the harmonious synthesis of Buddhism, Taoism and Confucianism.”

One of the most beautiful carvings is the sleeping Buddha- Sakyamuni as he is called in China. It is 31 meters (101 feet) long, in a reclining position, and surrounded by much smaller statues of his mourning disciples and family members.