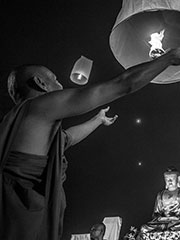 The religious philosophies and schools of thought in Buddhism have evolved since Buddha’s death into diverse, and complex traditions.

Buddhism has evolved into myriad schools that can be roughly grouped into three types: Nikaya, Mahayana, and Vajrayana. Of the Nikaya schools, only the Theravada survives. Each branch sees itself as representing the true, original teachings of the Buddha, and some schools believe that the dialectic nature of Buddhism allows its format, terminology, and techniques to adapt over time in response to changing circumstances, thus validating dharmic approaches different from their own.

Although Buddhists concur that taking refuge should be undertaken with proper motivation (complete liberation) and an understanding of the objects of refuge, the Indian scholar Atisha identified that in practice there are many different motives found for taking refuge. His idea was to use these different motivations as a key to resolving any apparent conflicts between all the Buddha’s teachings without depending upon some form of syncretism that would cause as much confusion as it attempted to alleviate. The various motives for taking refuge are enumerated as follows, typically introduced using the concept of the “scope” (level of motivation) of a practitioner: