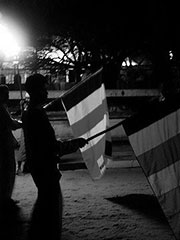 The Buddhist flag is a flag designed to symbolise Buddhism. It was designed in 1880 by the Colombo Committee, comprised of Ven Hikkaduwe Sri Sumangala Thera (Chairman), Ven. Migettuwatte Gunananda Thera, Don Carolis Hewavitharana (father of Anagarika Dharmapala), Andiris Perera Dharmagunawardhana (maternal grandfather of Anagarika Dharmapala), William de Abrew, Charles A. de Silva, Peter de Abrew, H. William Fernando, N. S. Fernando and Carolis Pujitha Gunawardena (Secretary). Colonel Henry Steele Olcott, an American journalist later made suggestions for modifying it, which were adopted. It was first hoisted in 1885 in Sri Lanka and is a symbol of faith and peace. The five colours of the flag represent the colours of the aura that emanated from the body of the Buddha when he attained Enlightenment:

The sixth vertical stripe is termed “Pabhassara” – the “resplendent glory”. It is the successful culmination of our practice as a Buddhist, having started out of compassion for oneself and all beings, we follow the Middle-Path of modesty and moderation. After which, we obtain the great blessings of practice and see the purity and truth of Dhamma. Insights arose and wisdom is obtained, thereby freeing us from all afflictions and suffering!