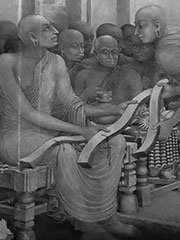 Buddhaghosa means “Voice of the Buddha” in the Pali language.

His Visuddhimagga (Pali, Path of Purification) is a comprehensive manual of Theravada Buddhism that is still read and studied today. The book is divided into sections on Sīla or Ethics; Samādhi or Meditation; and Pañña or Wisdom. This is a traditional division in Buddhist teachings, which suggest that ethics are essential to meditation, and that meditation is essential to developing wisdom. From the Buddhist point of view this is the “path of purification” because it purifies the mind of the defilements of greed, hatred, and delusion.