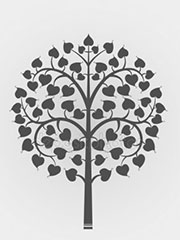 The Bodhi tree was a large and very old specimen of the Sacred Fig, located at the Mahabodhi Temple at Bodh Gaya (about 100 km from Patna in the Indian state of Bihar) under which Siddhartha Gautama, the spiritual teacher and founder of Buddhism later know as Gautama Buddha, arrived at Bodhi. The Bodhi Tree belongs to the Sacred Figs (Ficus religiosa), also known as Bo, Pipul (Peepal) or Ashwattha trees, which are sacred to Hindus, Jains and Buddhists. According to Buddhist belief, Siddharta Gautama meditated under this tree, mentioned as Ashwattha in the Tipitaka, when he achieved Nirvana. The word ‘Ashvattha’ is derived from the Sanskrit roots ‘Shwa’ meaning tomorrow, ‘a’ indicating negation, and ‘tha’ meaning “one that stands or remains”. (The Hindu philosopher Shankaracharya interprets the name to indicate “One which does not remain the same tomorrow”, such as the universe itself.)